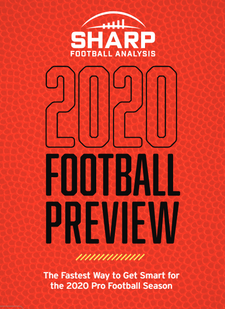 For best results, view on computer (not mobile devices) 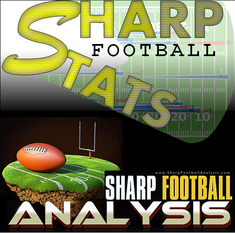 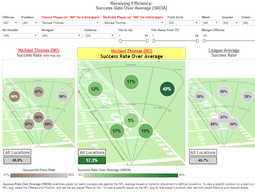 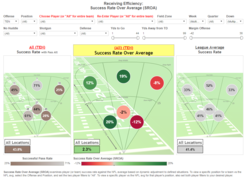 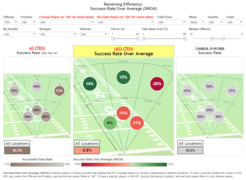 This is the second half of my “how to pass more efficiently series”, you can find the first one here:

The NFC seems to be no different than the AFC in the fact that elite tight ends are some of the most efficient pass-catchers in the NFL and “receiving-backs” are largely unsuccessful. The source for all of these observations is the Receiving Success Rate Over Average (SROA) tool at Sharp Football Stats.  Here are my findings for the NFC:

About the author:  Connor Allen (follow: @ConnorAllenNFL) was crowned co-winner of the Sharp Football Stats 2017 Writing Contest.  He will share articles featuring his analysis throughout the 2017 NFL season. 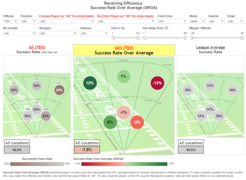 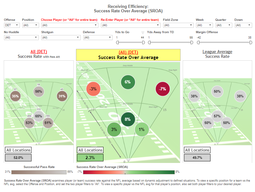 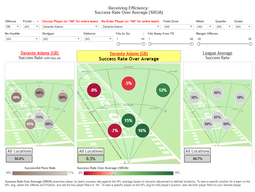 Hopes are high for the Titans this season.  Their win total was set at an incredibly high 9.5 wins, before being bet lower down to 8.5.  But that alone is a massive increase from the 5.5 projected wins the Titans were lined at heading into the 2016 season.  Off of 3 wins in 2015, Marcus Mariota's rookie season, expectations were for another subpar season.  But the team went 4-0 in games decided by a FG or less, and instead of splitting those games and finishing 7-9, the team won all 4 and finished 9-7.

It would be a massive understatement to suggest that Titans fans are optimistic about the season.  They believe the team has found the franchise star, their foundation and cornerstone for years to come.  And with added weapons at the receiver position, there should be no reason to believe the Titans won't improve in Mariota's 3rd season.  But there is one element of Mariota's game which has been lacking.  And if he fixes it this season, look out.

Marcus Mariota has been terrible when passing to his right.  He was bad in 2015, his rookie year, and he was bad his sophomore year last season.  How bad was 2015?

The main thing you'd want to consider immediately is sample size.  But in over 300 attempts to his right over two seasons, this isn't a sample size issue.  Mariota's success everywhere else, in over 450 attempts, is a consistent 66% with almost 8.7 YPA and well over 100 rating.  To the right, that completion percentage drops to 58%, the average yardage is 2.3 yards per pass worse, and the rating is over 20 points worse.

Here is how Mariota's passing looked visually, thanks to the dynamic Receiving Success Rate Over Average (SROA) tool at Sharp Football Stats:

While first and second down still reflected these bad patterns, third down was especially concerning.  Mariota fired over 60 attempts to his right on 3rd down and just over 25% recorded first downs.  To his left, he fired 57 attempts on 3rd down and 58% resulted in first down.  That's a massive difference.  If you were defending Mariota on 3rd down, you'd try to flush him to the right and hope he'd throw to his right, rather than allow him to throw to his left.  Here is what his SROA looked on 3rd down:

And when the game is close, within 1 score up or down, Mariota's success to the right was even more below average.  In almost 100 attempts to the right in one-score games, Mariota posted a 35% success rate, whereas it was 20% better (55%) when passing to his left:

I wrote about this issue from Mariota in my 2017 Football Preview.  When trailing, Mariota threw nearly 100 attempts to the right side of the field and averaged a 67 rating (31st in the NFL).

Despite the consistency in problems from 2015 to 2016, I still was hoping this was an anomaly.  Some type of odd occurrence that, despite the stats (both basic and advanced) showing a major issue existed in his ability to throw to his right, there was no concern.

But then I watched his week one preseason game.  Yes, he threw only 3 passes.  But the only one he threw deep right was very inaccurate and nearly intercepted.  Hopefully this was just another random throw which shouldn't be read into.  But it was enough to prompt me to watch every single pass attempt to the deep right in 2016.

However, I decided to study the film of every one of his passes to the deep right.  He clearly struggled to his right in general, but I focused on the deep right passes as these are where his larger gains would occur, and where the misses would result in the most negative-EV.  Below is a reel of most of Mariota's passes to the deep right from 2016.  I cut only a few throws which were from extreme bootlegs/wild scrambles or had him tossing it downfield just before running out of bounds.  You can see for yourself some of the issues.  The first pass is the one from the 2017 week 1 preseason game this past weekend, followed by his 2016 attempts:

Mariota has better receivers this year, in Corey Davis, Eric Decker and Taywan Taylor.  Last year, the receiving options left a lot to be desired.  Perhaps this will help Mariota in 2017.  Because while many of the passes in the above reel were not accurate, rather than receiver drops, perhaps better receivers would have run better routes and put Mariota in more positive-EV situations to complete the pass.

However, it should be noted that we're not isolating only these passes to the right and saying Mariota's receivers were bad.  Mariota and these receivers were outstanding to the left.  They were far above average.  Exceedingly so.  But there were notable struggles to the right.

There are other areas Mariota needed to work on apart from passing to the right, although that is the most critical.  On early downs in the first quarter, due in part to play scripting, Mariota recorded a 100 passer rating, averaged 8.2 yards per attempt and completed 69% of his passes.  However, after the first quarter, his early down passer rating dropped to 81 (25th in the NFL), he averaged just 6.3 yards per attempt and completed just 57% of his passes.  Those numbers became even worse when trailing, as his 68 passer rating ranked 34th, he averaged 5.6 yards per attempt and he completed just 54% of his passes.  Early down passing correlates tremendously toward winning in the NFL, and Mariota’s passing on early downs must improve, particularly after the script runs out and it becomes the 2nd quarter.

But let's not paint Mariota in this totally negative light.  What are some positives from the passing game in 2017?  Unlike 2016, where the Titans played the 14th rated pass rushing defenses, which helped parlay into the 4th best defenses preventing explosive passes, it’s much easier this year. The Titans play the 26th rated pass rushing defenses and likely as a result, these defenses allow the 2nd highest rate of explosive passes. In Nashville, that’s literally music to the ears of Mariota, Matthews and Davis. Matthews was the most dominant deep threat for the Titans last year, and delivered a 138 rating deep left and a 141 rating deep middle.

While I'm extremely optimistic in Mariota as a passer and believe the Titans are certainly headed in the right direction (no pun intended) with him under center, I really want to see him develop his ability to be consistent when throwing to his right.  If Mariota can develop those traits and deliver more efficiency on those attempts to the right, the sky is the limit for him and the Titans offense in 2017. 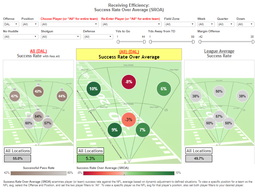 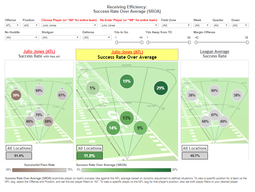